My friend, Kim, is back in Louisiana for a while, with her hubby.  They’ve been traveling the nation for couple years with their camper and canoes, taking in all the scenery and meeting new people.  It’s been five years since she’s been to my house, and that was “pre-Katrina/Rita/Gustave/Ike”.

I was so glad to see her and wanted to set about exploring right away, but while she was helping me cook lunch for the carpenters, 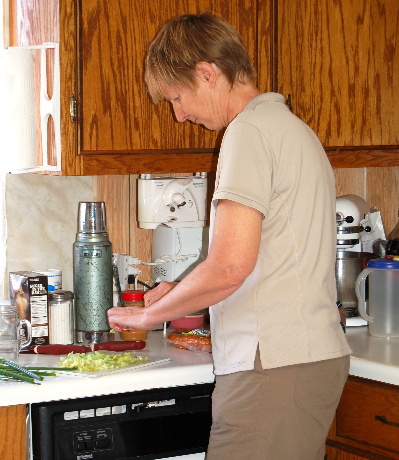 I received a very important phone call from someone looking for a certain type image of Louisiana.  That took up some of our time after lunch, but then we were off on a car tour on a cloudy evening. . .

I call this Line Art.  Kim made me stop to photograph this. 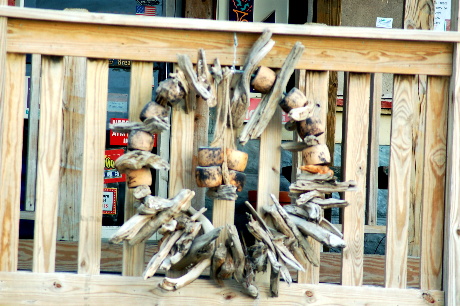 There was this striking driftwood wreath made by my friend, Etta, and hanging on the front of her store.  I didn’t let Kim have enough time in there . . . the sun was setting, and we had to get back on the road.

There were other interesting photos on that car tour, but I’ll move on to the next morning, and our swamp tour that turned into a great adventure. 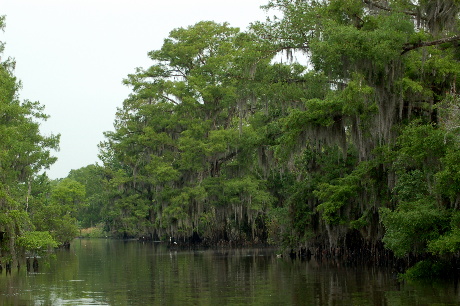 It started with a trip across the lake to this familiar spot . . . the only living cypress swamp in this area (same place LilSis and I visited the Swamp Dwellers that time). 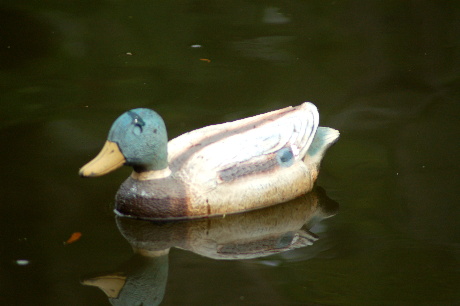 This old decoy floated past us as we drifted in, and Kim snagged it for my stray decoy collection.

We tied up to my friend’s little camp, unpacked our lunch, binoculars, cameras, and just enjoyed being there.

One of these days I will be able to do what Kim does:  She identifies the birds from their songs and calls without having to see them.  It’s pretty amazing.  She identified this little one that way . . . 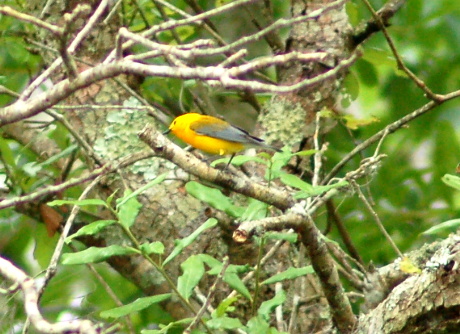 as it greeted us with a beautiful song–the song of the swamp canary or prothonotary warbler.  We saw quite a few of these.   She also heard a northern parula, which landed briefly on a nearby branch, allowing my my first sighting of one.  What a gorgeous little bird.  Sorry I don’t have my own photo, but the birds were not close enough for my lens, and looking at them through binoculars was so very rewarding.

While birdwatching, we heard a familiar call we both recognized as belonging to the barred owl, “Who-cooks-for-you?”. And then off to the left, in the trees came the answer from the female.  We listened as they called to one another, and the calls grew closer together.  Then they chuckled and laughed and all was silent, including the migratory chirping.  Shortly, the migratories started calling again, and all of a sudden, “Swoosh!”  and swoosh again.  The pair of barred owls flew across the water, one behind the other.  After about a quarter of an hour, they flew back into the swamp again. 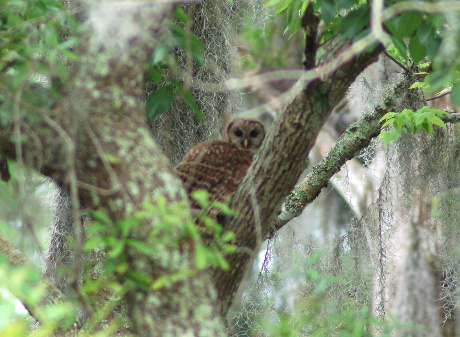 I managed to quickly squeeze this one off before it flew again.

Kim and I were sitting at the picnic table, looking across the water.  She was thumbing through her Sibley field guide, chatting about nothing really, when all of a sudden I saw a flash of color land behind a clump of leaves across the water.  “Hand me the binoculars!!”  I raised them slowly to my eyes, not losing site of the treasure, and sure enough, there was a touch of blue and red, which can only mean one bird:  P A I N T E D  B U N T I N G !  !  !   “OH MY GOSH, KIM, it’s a PAINTED BUNTING.  Here, look!” I screamed in a whisper.  She spied the bird and it quickly flew across the water and landed on a low branch to our left, where Kim was able to get a good look at it through the glass.  I was so excited for her, that I forgot to ask her for another turn to see it before it flew away.  I think that is only the third I have ever seen.   We were beside ourselves with excitement about seeing that bird.  If you’ve never seen one, you might not understand our joy!

Among the migratory birds we saw and/or heard were the following birds:

ARE YOU SNORING YET, STEFFI?   Is that enough bird calling for you?  Seriously, though, we really did see ALL THESE BIRD species–most of them in a four-hour time period from either my boat or at that one spot in the swamp.  That, my birding friends, is nothing short of amazing.

Later, we saw a raccoon running up a tree, and a  marsh bunny hopping on the edge of the water.  We watched a baby gator taking a nap.

Someone commented below that I must have more photos.  Well, let’s see what I can muster up . . . . 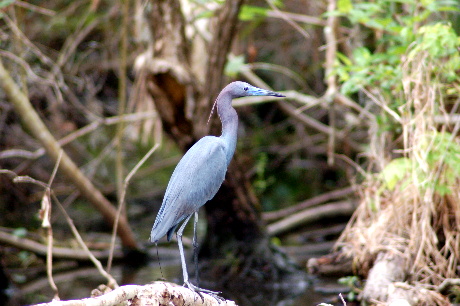 This baby flew past us as we were leaving in the boat, landed on that branch, and posed this way and that for us as we slipped slowly by, snapping away. I love that little feather sticking out of the back of its head, don’t you? 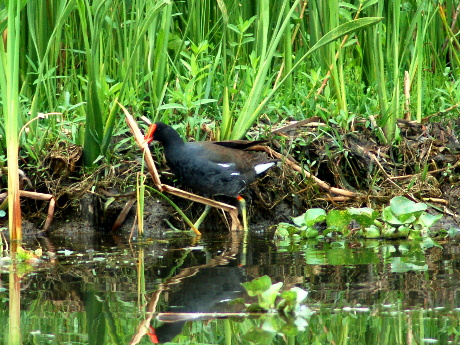 On our boat ride, we saw quite a few of these sweet little moor hens, locally called marsh hens. 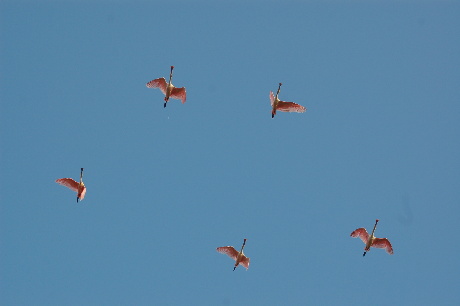 And we saw a very large and colorful flock of roseate spoonbills, and they were dark, dark pink. 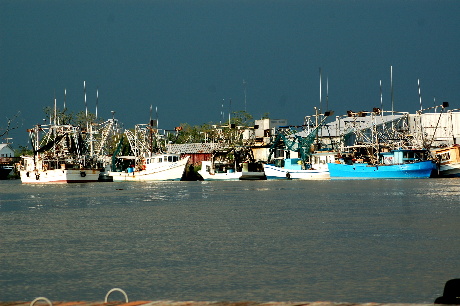 these shrimp boats harbored together, and other things that will have to wait.

Kim only stayed two nights, but we packed a lot into two days.  I can’t wait until I can save enough money to go see her in New Mexico.  I’ve never been that far west.

And now, with work on the house slowing to a snail’s pace, I have another guest from the realm of blog readers.  She would like to remain anonymous for now, but I met her this afternoon, and I can’t wait to spend more time with her tomorrow.  It’s too stormy for a boat trip, but maybe I’ll get to take her on a car trip.

For now, think about coming next year to possibly catch the migratory birds out at the cypress swamp.

Until next time, I remain your sleepy

PS  It is midnight o seven, and I love you so much that I gave up sleep to finish this for you.  Good night.