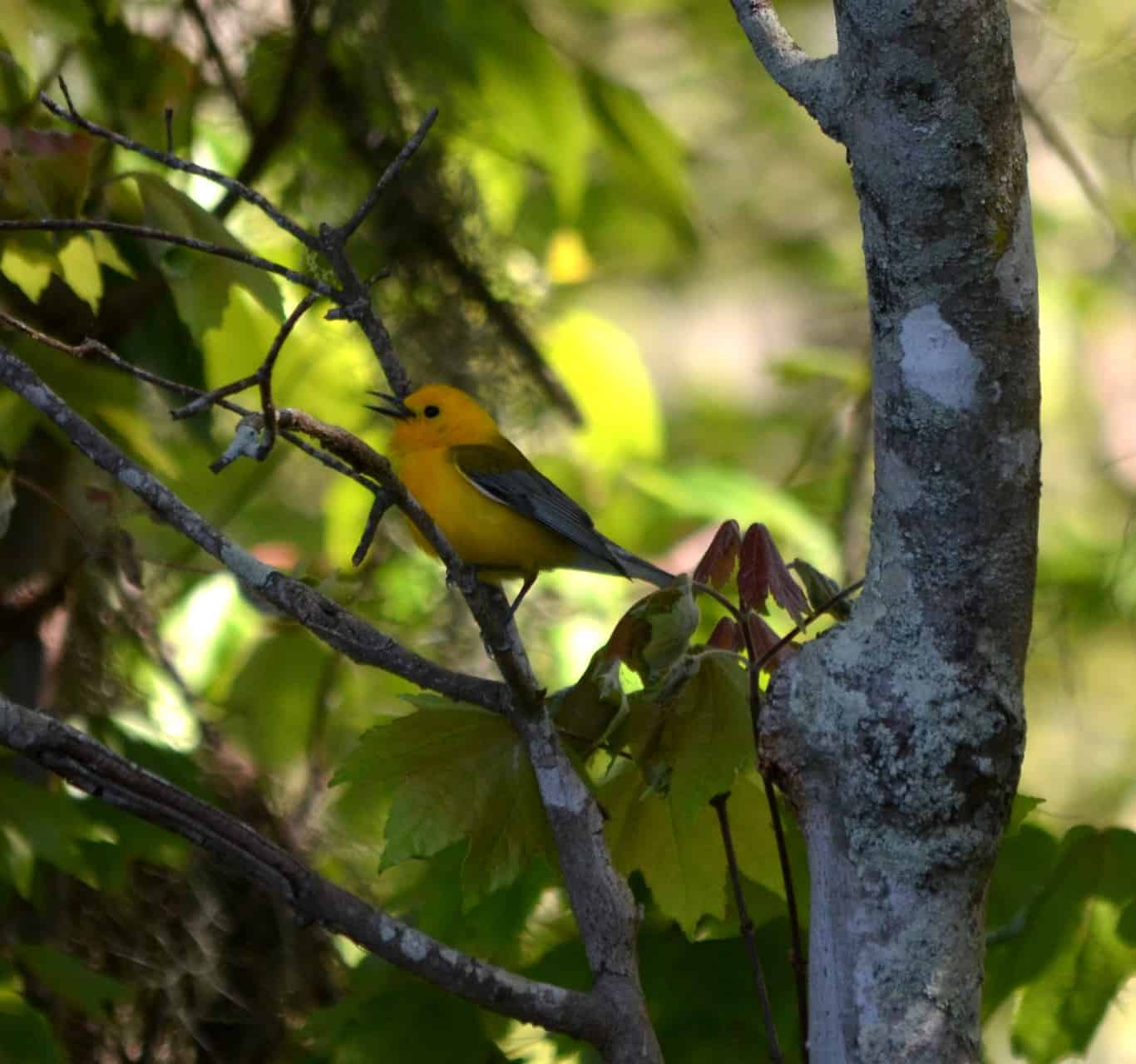 Week two of the PROW project happened just one week after we cleaned the boxes in preparation for the males to return from Central and South America. And as we checked each of the 30 boxes around Lake Palourde, we were pleasantly surprised to find that the males had already arrived.  We detect them first by their song as they flit among the tupelo-cypress branches in search of the perfect home to which they will lure their potential mates.  The male first inspects the box, and if he decides it’s suitably located in a safe place with enough canopy to protect the box from the harsh noon sun, he then begins to line the bottom of the box with pieces of Spanish moss and other greenery in hopes that a willing female will inspect his handy work and accept the box as home during the four-month breeding season.

This beautiful male sang loudly to us from a nearby branch, and didn’t seem the least bit bothered by our presence. Natalie always wears her binoculars around her neck so that she can detect if the male birds have a band around the left leg, which would indicate that she had banded it the year (or a prior year) before.

If memory serves, we heard a male PROW singing at almost every one of the 30 boxes, which is a very encouraging sign.  Remember, this is the third breeding season the boxes have been in place, and some of these males and females may have either used these boxes before OR were hatched in one of our boxes or in a natural cavity nearby.

And of course we saw other swampy things along the way, like a fat water snake sunning himself on a stump, and a young eagle flying with its mother and father, and an adult eagle watching us from its lofty perch. 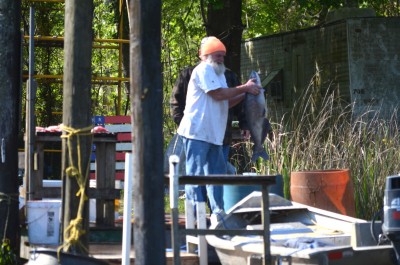 And then there is always the human element.  For the most part, people show courtesy by slowing down when they see two women in a small boat hanging around among the cypress stumps, fooling around with the nest boxes.  Sometimes, they come to a complete stop and wait for us to emerge from the shadows so they might ask us what we’re doing. They are all very curious as to what the boxes are for. Once we tell them, without fail, they all have seen these little yellow gems flitting about and many of them have seen them nesting around their camps but had no clue they travel so far to this breeding ground.

On one particular day last year while we were taking the boat out, an old pickup truck hauling an old crawfishing-type boat out of the water introduced himself and asked us what we were doing out there.  We encountered “Jule” a couple more times that season and on one occasion gave us catfish fillets that he had just caught and cleaned.  On this day, I yelled a greeting to him, and he responded by showing his catch of the morning thus far.  He fishes via a long line and hook, baited, and hanging from a segment of old swimming noodle.  You know what I’m talking about?  Turns out, lots of folks in this area use those noodles as substitute “jug lines”, and they work just as well.  I figure before the summer is over, Jule will once again gift us with his catch of the day.  Thank you, Jule!

Lastly, one of the most beautiful sights I’ve ever encountered on Lake Palourde . . . . Mr. and Mrs. Brown Pelican hanging out in the upper branches of a cypress tree.  Natalie said that we had seen this before, but for the life of me, I do not recall having seen brown pelicans hanging out in cypress trees.  It just doesn’t compute, because these birds nest out on the islands in the Gulf of Mexico.  Of course, I see them around Bayou Dularge throughout the winter, but my home is much closer to the Gulf than Lake Palourde; hence my surprise to see them in a freshwater swamp so far inland.  I hate to say it, but it’s not a good sign, meaning that the saltwater intrusion might be far worse than I thought.  Maybe I’m making a mountain out of a mole hill, but as fascinating as this sight is to me, it’s just not something we should see every day.  By this time, the pelicans should be making their way back to the islands to breed.  I’ll keep an eye on things and let you know how much longer they hang around! 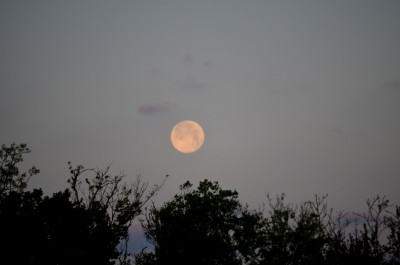 Also during the second week of the project, Day 4 took us into the Mandalay Wildlife Refuge, where we have 20 boxes.  Even though the Mandalay area is farther south than Lake Palourde, the PROW arrive here about a week or so later than they do at the lake.  We can only speculate as to why that is.  We also have recorded fewer birds adopting our boxes in this location, and again, we’re not exactly certain why.  Maybe the location just isn’t prime OR maybe there are more natural cavities for them to use for nesting, possibly their preferred choice.

Regardless, there wasn’t a lot of activity nor was there much of anything exciting or out of the ordinary to photograph.  The day started off like this . . . with a beautiful setting moon. 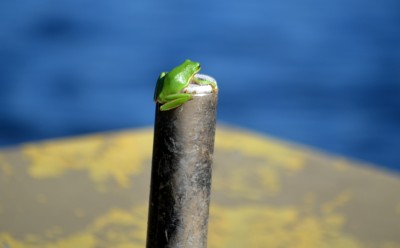 And during our return boat ride to the dock, this little guy climbed out of the pole, holding on for dear life as he inspected his new surroundings.

I’m not sure how long he had been residing or sleeping in that pole on the front deck of my boat, but I know if he climbed in there to take a nap while the boat was parked at the house, he was in for a huge awakening!

We continued at full speed, as he continued to grip the pole with his little suction-cup feet.

Once we turned out of the Gulf Intracoastal Waterway and into the smaller canal leading to the dock, I decided to have mercy on the little guy.  I pulled up to a tree along the bank while Natalie gingerly picked the little guy up and placed him on a branch.  And that is the story of how the little city tree frog became a swamp tree frog, just like that!

Once in a while I have the great opportunity of fishing with my friend, Jackie.  We take her boat, she lets me drive this beauty, and I get to play “Fishing Guide”!  No matter what, we always have a blast–even if we don’t catch fish. We headed to Lake Decade to see if we might… 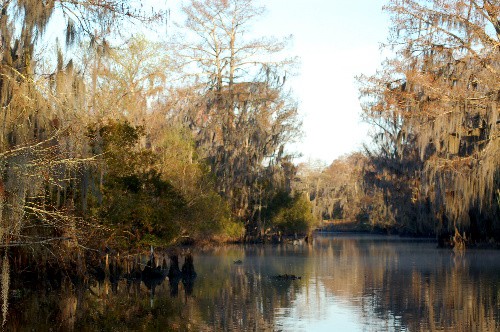 After two wetland tours with junior high and high schoolers, high winds, and rough seas, I am elated to shout to the whole wide world: NO HEADACHES TODAY! I feel human again. This may or may not be so good, but I have my appetite back, as well. Now, what am I going to do…

Mommy, I can fold the clothes, too! Without photos, most of you would not believe the things this little coon is capable of. She always wants to be where I am–whether it’s folding clothes or cleaning windows tending the plants . . . hanging clothes on the line . . . or just helping me… 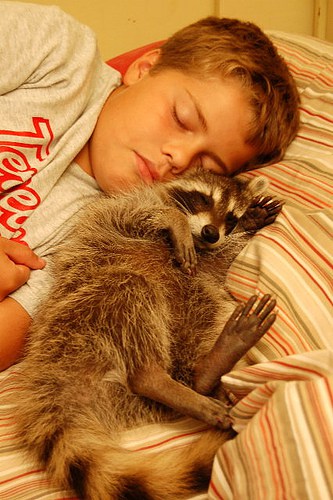 The words of the old song, “She’s gone, gone, gone, and I can’t go on . . .whoaohoh” keep running through my mind. My coon-raising friend said she would hear and heed the call of the wild by November. He was right. I miss her kid glove hands, her ultra-soft underbelly, the myriad squeaks and…

At least in much of Terrebonne Parish: An official from a major local land company and holder of hundreds of hunting leases in Terrebonne Parish, announced today that due to the rumors that the going price per foot for big alligators is dropping to half of what it was last year. These lease holders/hunters will…

Today was a very long day for me. The annual writers’ conference was held at our main branch library in the thriving metropolis of Houma, LA. Even though my book has been out for three years, an invitation to sit at a table all day long and peddle my book still appeals to me. That’s…