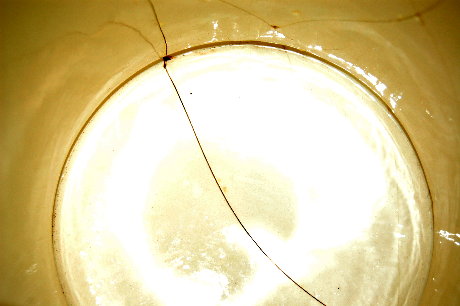 this cracked piece of ceramic . . . 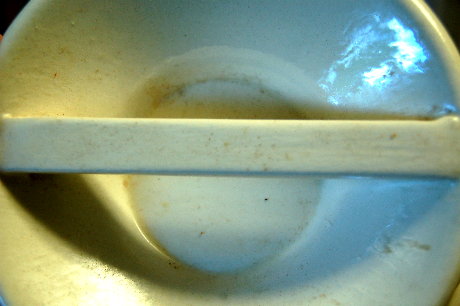 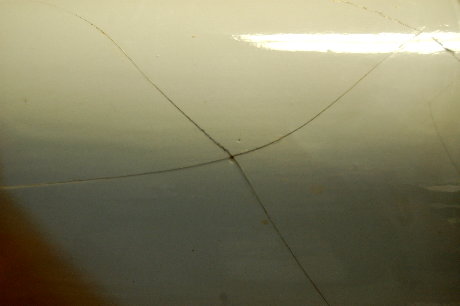 and this cracked piece have in common?

They are all part of a ceramic canister set Mother made many years ago for our first house.  With less countertop in the new kitchen, I have to pick and choose what goes there.  Functional rules over sentimental. So, I’ve been distressed about parting with the cracked set that is missing the smallest canister.

The set represents a time in Mother’s life when she was still able to hold a paint brush in her arthritis-curled fingers.  To me, she became one of the best ceramic artists around at the time.  And now, I think it might almost be a lost art.

So this morning, I was about to photograph the set for posterity and later print the photo and hang it in my kitchen as a reminder . . . when a moment of clarity crept in where cobwebs reside and cut through the fog with a bright idea:  “Honor thy Mother, and her artwork in your new kitchen”.  I climbed the step ladder, stood on top of a barstool, and placed the canister set in its new spot.  And I love it. 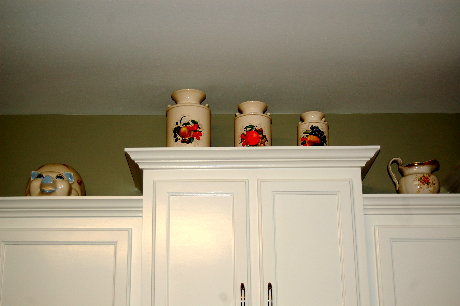 I rushed to the old house and gingerly gathered each piece, brought them to the new house and cleaned them.  To the left is a piggy bank she made for The Captain.  He left it behind, not knowing where he would put it in the new house.  (To the right is a pitcher Shoreacres sent me.)

It seems Mother’s artwork had no boundaries:  She chose greenware with wild animals, fruits, and even flowers.  I had never realized this before now, because before , everything was spread throughout the house.  Now, I have a place for each piece of art, like a gallery showing of her best work. 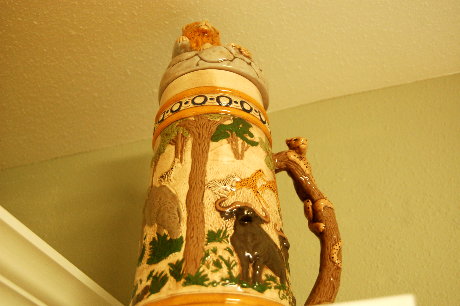 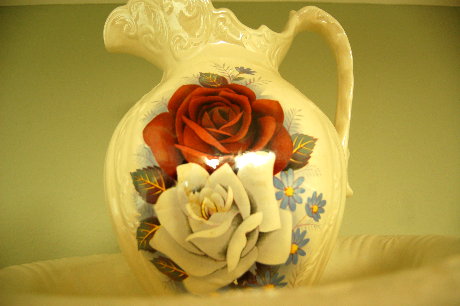 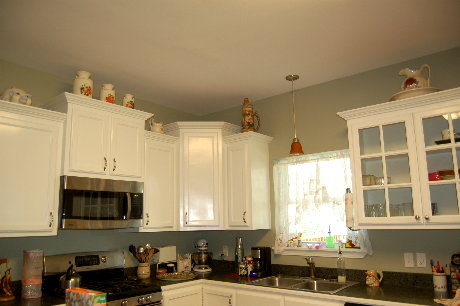 And for those of you whose eyes are scanning the countertops and noticing all the clutter I’ve already accumulated, would you like a closer look at that little mug to the right of the sink?  I haven’t found its final display spot yet, but I will. 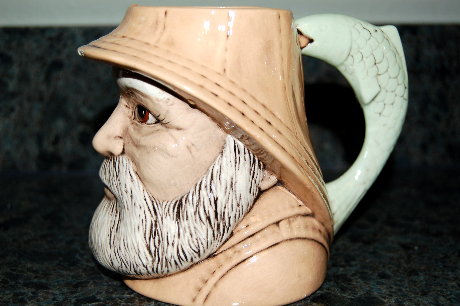 This is one of her finest pieces and shows in great detail her ability to visualize a piece before actually seeing the finished product.  For those of you who have never worked with ceramics, the painting of an item is done before firing, and it is very hard to project what the colors will turn out like after the firing.  It’s not like painting a picture where the colors are as they appear right up front.  I love the “fish handle”.

Her attention to detail in the old man’s face and eyes warrant a very special spot somewhere in our new home for him . . .

but I’m not sure yet where that will be.  The rest of the pieces she made for us were stolen years ago . . . .

This gallery has hopefully helped me turn the corner in dealing with the rest of the items in the old house that are not as meaningful as these. 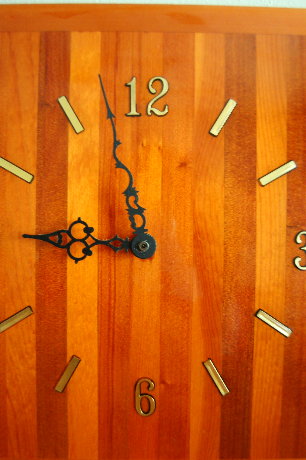 Where should I put the butcher block clock Daddy made?  I had it in my “girls only bathroom” in the old place but would like to display it more prominently in new house.

Maybe on the wall behind Mother’s player piano?  And then I can go dig out the charcoal portraits they had done the last time they were in the French Quarter (which was where they went for their honeymoon during Mardi Gras back in 1954.)

After retirement, Daddy took up woodworking of all kinds, trying his hand at this and that.  Then he got serious about it and fell in love with an art form that deserves a post of its own, built a shop, and sold his work at juried art shows and craft shows in a couple of states.  More on that later, but for now . . . where should I put this clock?