A day’s haul of gar for Verrett. Jug lines visible in bottom of boat.

Gone are the days when his ancestors stalked buffalo on the Louisiana prairies.  Gone also are the days they used tomahawks to slay their supper.  But Houma Indian, Rickey Verrett, still stalks his prey and still wields a hatchet on a regular basis.

With a savage whoop and the stunning blow of a hammer, reminiscent of his ancestors attacking their prey, this fisherman brings a sudden halt to the noisy thrashing of his own prey – an alligator garfish—before hoisting it into his well-seasoned Carolina Skiff.

Down in the depths of the Terrebonne Basin in south Louisiana, Verrett continues to rely on the riches produced by this fishery to sustain his livelihood.  Alligator gar is the fish of the day about 180 days of the year for this native who loves to fish.

Atractosteus spatula is the largest of the gar family, and is mainly pursued by commercial fisherman but is a popular fish taken while bow fishing at night.  While encyclopedic information states that these fish prefer freshwater, Verrett harvests them regularly from the saltwater estuary of Terrebonne Parish.

He has earned a reputation as one of the most productive gar fishermen in the area, according to NSU marine biology professor Dr. Allyse Ferrar.  “Rickey sets out about one fourth the gear of other gar fishermen in the same area but consistently harvests the same amount of fish they harvest.  He understands the movement of the gar and how factors such as wind, temperature, and tides can impact his catch.”

At first glance, the makeshift wharf where Verrett docks his boat looks more like a recycle station than a landing.  Empty plastic two-liter soda bottles spill over the sides of an old ice chest.  Some of the jugs, dented and a faded orange color, have apparently served their purpose.  Others lie in plastic crates, clear and transparent.  However, the bottles that really catch the eye are the ones painted bright fluorescent orange.

With bare feet and hair down to his shoulders, Verrett sits atop a chest-type freezer turned old-fashioned “icebox”.  With a can of spray paint in one hand and an empty 12-ounce soda bottle in the other, he explains that the two-liter bottles function as floats or buoys for his gar fishing lines—called jug lines.

Verrett is a very patient man.  Deeming it too wasteful to spray-paint the jugs, he sprays the paint into the empty soda bottle, and then uses a brush to paint the now-liquid paint onto the two-liter jugs.  (I resist the urge to tell him he can buy fluorescent paint in bottles that he can paint right on, thereby omitting one tedious step.)  While he works, he explains how the fluorescent orange makes the jugs more visible against the background of the marsh grass.

“See this one right here?” he asks, holding up a faded orange jug with puncture marks in it.  “These are teeth marks—alligator teeth.  The alligator comes and tries to bite the jug and puts holes in it.  Then the jug sinks and I lose the fish, too, but I took care of the problem.”

Proudly he displays his latest innovation—a plastic bottle filled with Styrofoam.  “I had the idea that this would work.  The first thing I used was those Styrofoam peanuts, but the gators could still bite the jugs.  Then I tried the spray foam from a can, but that costs too much.  Then I heard about this stuff you buy in big cans and mix together to make Styrofoam.  You have to mix it real fast, but it works real good.  See?”  Verrett squeezes the bottle to show its durability and states with a victorious smile, “Now the gators can’t bite my jugs!”

Here’s how a jug-line rig works:  The soda-bottle “jug” floats on top of the water, with a fishing rig suspended below it.  The rig is made up of an eighteen-inch length of nylon line tied to a shorter length of stainless steel wire twisted onto a No. 9 stainless steel hook–a simple rig, but effective.  A clothespin holds the bait in such a position that prevents a shark from cutting the nylon line with its sharp teeth.

Unlike other commercial fishermen who purchase bait for their lines, Verrett is a frugal purist, still practicing the old ways of catching his own bait.  In the afternoon, he heads out with his cast net in search of striped mullet.  Verrett returns to his dock where he baits the hooks with the fresh mullet, stacks them in an old ice chest, loads up the boat, and heads south.

At today’s destination, Verrett drops the jugs strategically in shallow bays and out-of-the-way bayous.  He looks for places to drop the lines that will allow for the least possible route of escape for the fish.  That is because once the fish takes the bait and is hooked, it can swim and will continue to swim until retrieved.  Making sure of the final count released, which is twenty, Verrett heads home to rest for the early morning trip to find the jugs.

Before sunrise the next morning, Verrett once again heads south, racing the sun to the fishing hole.  As soon as he enters the first bay, he shouts with the excitement of a child, “We got a fish!”  As the boat nears the jug, he slams the throttle into neutral, catapulting his lean, muscular frame toward the front port gunwale where he reaches down quickly and snatches up the bright orange soda bottle in one fell swoop.

Seamlessly, he then grabs the hammer, which waits at the ready in a wooden tool rack on the gunwale, and strikes the unsuspecting garfish firmly on the head, rendering it comatose before he heaves it into a huge ice chest.  “That’s a nice one!” he brags as though this fish is the first gar he’s ever caught.

Of the twenty jug lines Verrett put out the night before, fifteen produce alligator gar of substantial size, two hold red fish, and three are lost.  Sometimes, but not often, Verrett returns with less lines than he put out because the fish manage to swim so far away with the tide that he cannot find them in a short amount of time.

He proudly relates a miraculous story of how he recently found a jugline that had been missing for two weeks, with the gar still hooked, alive, and swimming.  “See?  Dat’s good because as long as he’s still alive, I can clean him and sell him!”

After a couple of hours of fishing, we return to the crude landing, where a rickety table lies in wait for the first gar to be offered up like a sacrifice.  Freshly sharpened, a cane knife, hatchet, and kitchen knife wait like surgeon’s tools on the side of the cleaning table.  A bucket of bayou water used for rinsing hands and tools sits below the table.  The largest fish of the day is about four feet long and weighs about thirty pounds.  Verrett treats the fish with respect, making short work of the cleaning.

With pliers in his right hand and cane knife in his left, he slices through the tail while pulling upward on the armored skin.  Verrett continues the chopping and lifting up the entire length of the backbone toward the head. The three-foot length of skin is tossed on the side to be dealt with later.

With a sharp knife, he then slices the scaly skin away from the flesh, making it easier to pull off the side panels of scaled armor.  These, too, are tossed aside.

In the final steps, the fish is beheaded, gutted; the slabs of white meat in placed in his “icebox” between layers of fresh ice.  Verrett sells his catch twice a week to the highest-paying buyer, who may come from as far west as Opelousas and as far north as Shreveport.  Buyers, in turn, sell the meat mainly to seafood markets.

This fisherman wastes nothing, and that goes for the skin, as well.   Verrett layers the skins in old plastic swimming pool liners where natural agents of decay strip the scales clean for later use by his cousin and other artists who make jewelry and crafts with the garfish scales.

Using a five-gallon bucket and water from the bayou, this unique fisherman thoroughly washes all the tools of his trade, scrubs the cleaning table spotless, and rinses the wooden planks below his hardened, bare feet.

After I thank him for the gar fishing trip, I offer him money for fuel, which he promptly refuses.  As I’m loading my camera into the vehicle, he hollers at me, “Hey if it would be okay, could you get me a picture of one of the fish, maybe?”  As is his nature, he has no interest in what I might be writing about him or how many people might be reading about him.  Rather, he only wants photos of that which matters most to him—his gar fish.  I’ll be glad to do that for you, Rickey.

In a time when our society thrives on consumerism, and everything seems disposable, Verrett steps back in time and reminds us of the old adage, “waste not—want not”.  He reminds us not by word but by action.  He lives a simple life, works hard, is easily amused, and would not have it any other way.  We could all take a life lesson from this resourceful young man of the sea. 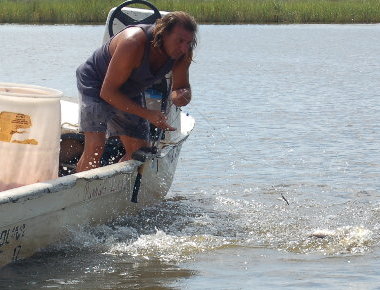 Beautiful jewelry made from gar scales that have been soaked in a bleach and water solution.  (Designed and made by Kim of Wetland Treasures Etsy Shop)