Despite the decreasing number of migratory waterfowl passing through our wetlands, duck hunting continues to be a much-anticipated sport in this area.  Friday afternoon, I stood in line at Songy’s Sporting Goods to buy my hunting license and Duck Stamp (nothing like a little procrastination, right?).  Later, Academy Sports was packed with folks (like us) picking up last minute shotgun shells, gloves, and face masks.  Near sunset, myriad boats loaded to the gunwales with gear, guns, and decoys left the marina like an armada racing the clock.

With promises of having gathered everything we needed for a safe and enjoyable hunt, Termite turned in early.  Saturday morning started at 4:30 a.m., with cool air, fog, and a fingernail moon pointing the way.  The big dipper was as pretty as it could be.

As we pulled out of the slip across from Camp Dularge, other members of our hunting club were idling by in their mudboats.  Silent greetings of nods and hand waves were exchanged.  Termite let them go ahead of us, since their boats are faster.  Smart move.

Bow lights working?  Check.  All around white light on stern working?  Check.  Life jackets on? Check.  Okay, GUN IT!  No sooner had Termite gunned the little 9.9 hp engine, than he had to back off the throttle.  Spotlight beams danced off the bank, across the water, up into the dark sky.  What in the world?  There were several boats sitting idle just off the middle of the channel.  All we could figure was that they had night blindness and could not see where they were going.  Some folks should NOT try to run their boats in the dark.

Without the spotlight, there was enough natural light from stars and moon for us to see the outline of the trees on the bank.  And for some reason, I was not nearly as frightened as I was last year.  I think it’s because we were in a boat that I felt safer in.

The ride to the hunting lease took about twelve minutes, and since we weren’t the first to arrive, the gate was already open, for which I was very thankful.  Balancing on the bow of a little boat trying to unlock the padlock with a key in the dark with nothing but the swinging gate to keep you from falling overboard is not my favorite part of a hunting trip.

Once on the lease, I relaxed and started taking photos, no longer worried about being run over by a bigger, faster boat.

“Mom, no flash photos.  You’re going to wake up all the birds!”

With great skill and confidence, Termite drove the boat right into the make-shift boat blind, which I don’t have a photo of because it was still dark and my camera will not take pics in the dark without the flash.  Sorry.

Termite wasted no time getting everything in place before “safe light”, which is the time shooting can begin.  Just as he spotted three teal coming to land in his decoys, a late-arriving club motored through his pond, spooking the teal and preventing him from taking his first shot of the season.

“Hey, bruh, what you doing?” asked Termite in his manly tone, irritated.

“Uh, going to my duck blind” replied the Johnny-come-lately.

“Try being earlier next time!” yelled some crazed woman from behind the roseaus.  I wonder if he has yet figured out who that was?

Daylight crept up over the trees to the sounds of wading birds flying over heading to breakfast.  It was so amazing to me that ibis, heron, egrets, and spoonbills flew almost within reach of us, as though they knew they were not fair game.  But the birds that are fair game stayed just out of shooting range most of the time.

Of course, there were life-like decoys in the pond signaling the would-be targets that all was well in the pond.

Termite called to them patiently.

Shots were heard from neighboring blinds, making Termite anxious that nothing had flown by us.  I heard that “boat blinds” are harder to conceal from the ducks.  As a result, less birds come within range.  Did you know that ducks are so particular that a glint of silver or a flash of white will make them turn and fly away? 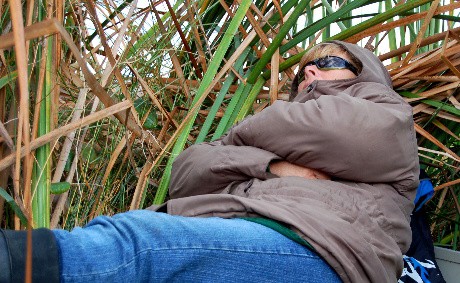 Maybe it was my fault the ducks passed us by more than once?  I don’t think they appreciated my wearing denim to the hunt.  Honestly, I didn’t think it made that much difference.  Oh, and this is how I duck hunt! 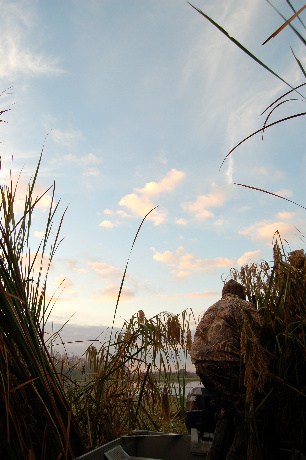 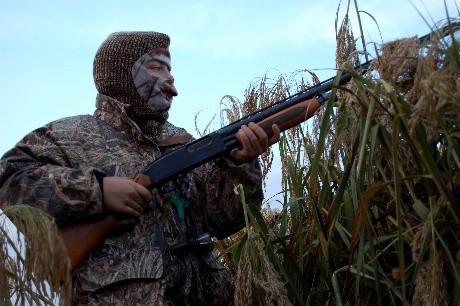 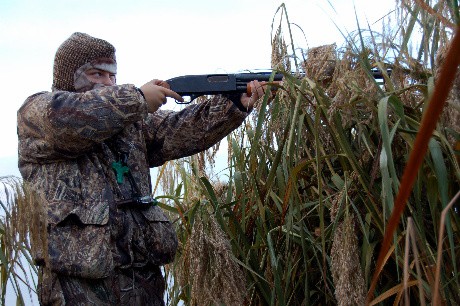 And if you miss?  Repeat two more times!  And if you still miss?  It’s too late.  Reload and wait patiently for the next birds to fly over.

To me, missing seemed sort of sad and anti-climactic.  But the truth is, even though he missed, he was thrilled from just the act of firing his weapon–the act of hunting.

After about two and a half hours of waiting patiently, he asked if he could go ahead and shoot some local waterfowl.  Widow Mary told me she would cook them for him if he would clean them.

So he shot and cleaned four gallinule.  Depending on how grossed out you want to be, I took photos of the cleaning process just in case you’re interested!