The World Wide Web has blasted open the doors and windows of opportunity for finding those out-of-the-way people and places.  The variety of folks who have managed to find this little bayou down in coastal Louisiana amazes me weekly.  Such was the case several months ago when a resident of North Carolina contacted me through this blog.

Allen LeHew, owner of Duck’s Cottage, a bookstore on the N.C. island of Duck, arrived, truck loaded down with his Hobie kayak, fishing rods, and enough tackle to tackle any type of fishing he might encounter during his stay on Bayou Dularge, Louisiana.

Before his arrival, there were rumors floating around that the speckled trout were still swimming around Lake DeCade, located in the lower reaches of Terrebonne Parish, Louisiana.  Typically, the speckled trout migrate from the salty waters of the Gulf of Mexico, north into our inland saline and brackish lakes, Lake DeCade being the closest and the favored lake for many a fall fisherman.  Usually, the trout depart the lake and are completely “gone” by mid-February.

Interestingly, though, the owner of the local marina took me to school on his belief that the trout stay in Lake DeCade through the spring, but because the water temps drop so low, the trout are illusive and harder to lure in the cold water.  This winter, around February 25th,  after several below-freezing days, we had a warm spell, with temps reaching up into the seventies.  The warmer air temps, in turn, warmed up the water enough to make those trout start biting again.

As the weather continued to warm, one fisherman at the landing the first week of March told me that he had caught eighteen trout in Lake DeCade just that very day.  When he described to me where he had caught them, I recognized the spot to be the very same place we had caught what we thought were the last of the “winter trout” back in early February.  Needless to say, this fisherwoman was intrigued and excited to hear this news.  Whether or not this fish tale was true or just a lure set out to entice was yet to be determined.

Once I showed the local map to LeHew and the options for where he might fish from either my boat or his kayak, he opted to fish from the boat and to take the bait set for us in Lake DeCade.

So, on March 29th, way past the break of day, we launched at the Falgout Canal Marina, and headed straight to the supposed sweet spot.  After gauging wind direction, we set ourselves up for the first drift, occasionally using the trolling motor to keep us “in the zone”.

It wasn’t long before we drifted across the serious hot spot, and the trout bite was on.  LeHew, testing a new soft bait he purchased in North Carolina, was the first to land a keeper fish. 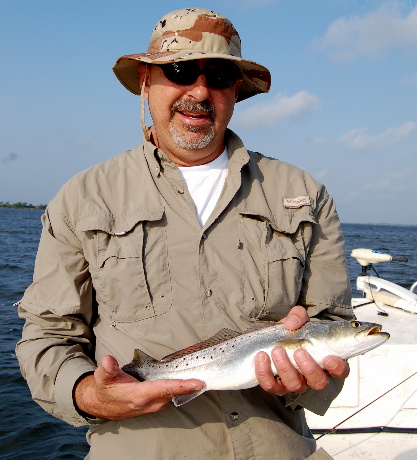 With the speckled trout fishing season closed until June in his area of North Carolina, and not having caught a trout in quite a while, LeHew was stoked after reeling in this head-shaking yellow mouth.  With only a few small throw-backs, the biggest trout of the day was a fat twenty-incher.

Within minutes of reeling in several substantial trout, the rods were bending and the line was spinning off the reel as we crossed over a school of cookie-cutter reds about fifteen inches long–one inch too short to hit the box.  LeHew still had a blast catching the reds he called “puppy drum”.  The fish we simply call a red, N.C. fishermen refer to as simply a drum; and the fish we call a drum, they refer to as a black drum.  Whatever the name, they still catch and taste the same! 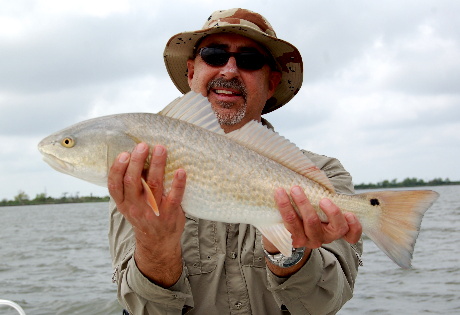 LeHew managed to pull out at least one keeper “drum” as we drifted over the red-fish hot spot a couple more times. 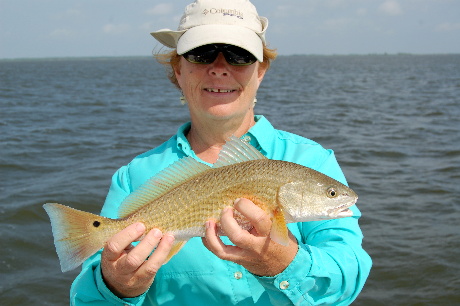 LeHew was impressed by the lighter golden color of the red fish we caught this day, as seen in the photos above.

While other guides would not refer to this four-hour trip as a “meat haul”, LeHew called it a very successful fishing trip, with a limit of keeper trout boated, several more lost at the gunwhales, and more reds thrown back than we could keep count of.  LeHew practices catch-and-release most of the time in his home fishing waters around the island of Duck, N.C., but today, we kept a few for him to share with nearby relatives he was planning to visit.

Day two fishing led us right back to the same spot.  Even though a cold front pushing lots of rain and even higher winds had passed through the day between trips, we were not deterred.  The cold front had a definite negative impact on the water clarity and the bite, making the trout more selective about the baits they were biting on. 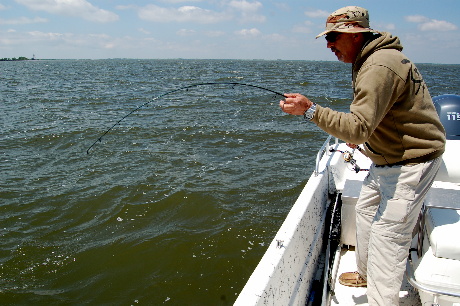 LeHew experimented with other soft baits, which , while I continued using the same swim bait.  LeHew’s bait experiments were not what the trout ordered, so he switched back to the bait that reaped rewards for him on Day 1.  It wasn’t long before a hungry fish grabbed his offering and peeled off line in such a way he thought it must be a red. 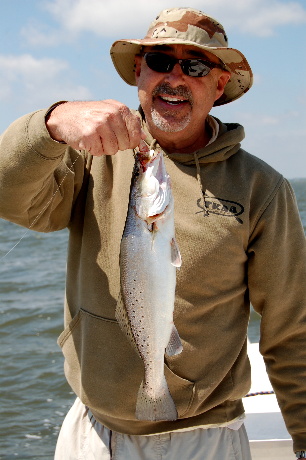 It was, however, a nice specimen of a speckled trout, which made his day and rounded out the two-day spring fishing trip for this North Carolina angler.

The tale that the specks might still be in Lake Decade well into the spring was not really a tale at all.  The proof is in the photos and the fishing tales being carried back to the island of Duck by one very satisfied fisherman.

Fishing and loving it,